In my keynotes and workshops, I always remind my audiences of how important it is for our own wellbeing, happiness and resilience to be part of something bigger than ourselves; I remind people to be ‘selfishly selfless’, as altruism leads to improved mental health.  I don’t always get it right, but I do my best.

Until ‘Brexit’ came along, I was not politically active; as an EU national, I can’t vote in UK national elections.  When I woke up on 24th June, I felt like the rug had been pulled away from under me, along with a big chunk of my European identity.  I am an immigrant, of German and Italian nationalities. I was born in Italy and grew up in the heart of the EU, in Luxembourg, as the daughter of EU civil servants.  At school, I saw a harmonious mingling of cultures and languages and was taught many subjects in mixed nationality groups in a foreign language (English).  When I came to the UK to study, I fell in love – with a man and with Yorkshire – and have stayed ever since. I have made the UK my home.  My British husband and I have two tri-nationality daughters.

As I face the prospect of living in a UK that is no longer part of the EU, I am worried.  I am worried that weakening the EU will threaten the longest period of peace Europe has ever known.  I am worried about the rise of extreme right-wing nationalism.  I am worried that ‘Brexit’ has legitimised the racist and xenophobic views of a loud minority in the UK.

So, I’ve taken my own advice and have decided to stand up for what I believe in.  I joined the ’48% and beyond’ Facebook group and co-ordinated the #StopBrexitPostcard campaign that took place last week.  I also attended #MarchForEurope on Saturday 3rd September, in London.

Just before my husband and I set off from our home in Doncaster in the early morning, I posted this photo: 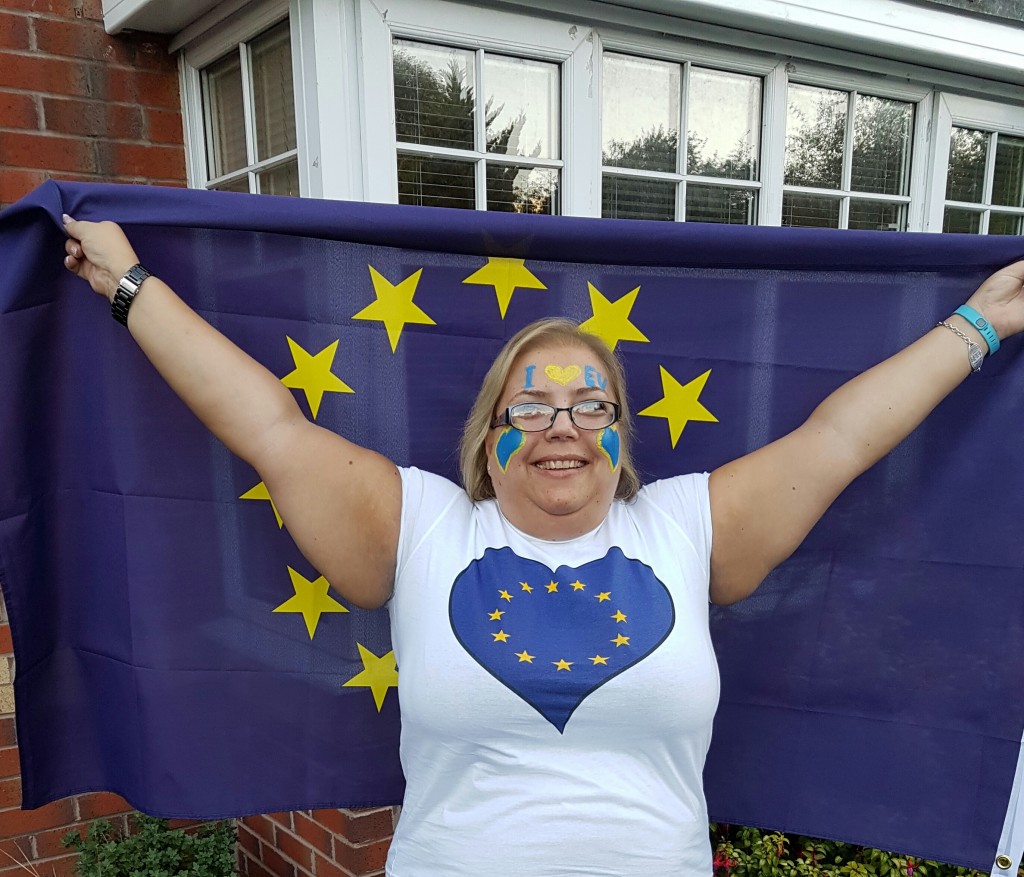 I must admit, the extent of the venomous responses I received took me by surprise.  I lost track of the number of abusive tweets and ‘likes’ and ‘retweets’ thereof!  I avoided reading them as much as I could, but a few jumped out at me.

Aside from being called both a Nazi and a ‘Marxist Leftie’ (interesting, as they are at opposite ends of the political scale!), and somehow apparently managing to be a member of the ‘rich elite’, a ‘middle class liberal’ and ‘one of the great unwashed’ all at once, the personal insults about my appearance ranged from the disgustingly offensive to the ridiculous – see a small selection, below ( I have edited the most offensive words but have not edited out the identities of the posters, as these were public tweets and therefore the posters have already willingly put them out for the world to see). 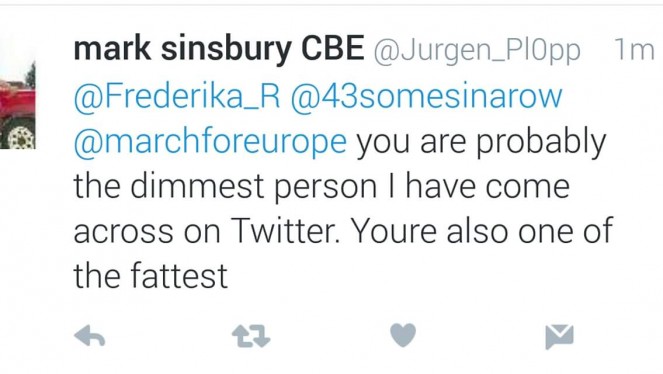 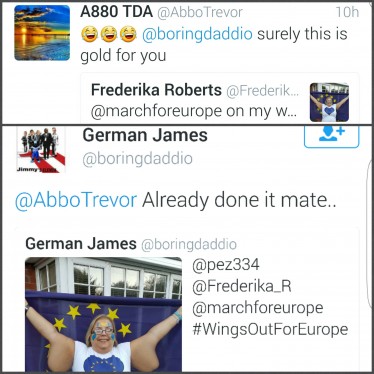 Someone even suggested that I shouldn’t wear a ‘Fitbit’(Because, clearly, us fatties are supposed to conform to stereotypes!), while another person actually said that perhaps I might read the posts and decide to lose weight!

I am fat, I do have ‘bingo wings’.  So what? It has absolutely nothing to do with my democratic right to peaceful protest.

The people who posted those tweets are ignorant yobs and bullies.  I don’t believe they actually care all that much about ‘Brexit’ – they’ve merely used it as an excuse to spout their vitriol.  People like that have always existed, but the relative anonymity if the Internet has given them more opportunities to ‘express’ themselves.  ‘Brexit’ gives them an excuse and some fresh targets to go for.

I don’t regret posting the photo

Many people on the March came up to me and said “Are you Frederika?  I recognise you from the photo!” and this helped me meet some great people and have wonderful conversations.

One such conversation was with a lovely lady and her wonderful son.  I think he must have been about 10 years old, possibly younger.

He told me that what struck him, as we walked past so many statues, was how statues represented people who had fought and died for us and for our freedom, and that it was all being taken away.  He also said that he felt like we’d all built a big tower together through lots of hard work and over a long period of time, with the help of the EU, and now ‘Farage and the others’ had come along and knocked it all down.  He said this so eloquently and beautifully, I wish I could remember his exact words to quote.

I know that many will read this and disagree with my belief that the UK should remain in the EU.   I also know that many do agree with me.  It saddens me deeply that the country is so divided.  I have loved living here for the last 25 years.  I don’t believe that vile internet trolls and despicable racists and xenophobes that verbally and physically abuse people are representative of the majority of ‘leave’ voters.

I believe – and this was put beautifully by one of the speakers at the March yesterday – that we need to find common ground for dialogue on both sides of the argument, and that there is plenty of common ground (e.g. we don’t like being lied to, we want to live in a fairer society, we want the UK to thrive and have a strong place in the world).

Whichever side of the ‘Brexit’ divide you are on, I urge you to make it your mission to reach out and have honest, open and tolerant conversations.  I will continue working towards stopping Brexit from happening, because I believe it to be fundamentally bad for this country and for Europe, but should I fail in my endeavours, I also hope that reasonable compromises can be reached.  Without dialogue and collaboration, that will not be possible.